As you may have guessed I am a fan of mathematics. Numbers themselves leave me cold, however. Even some of the great quests of modern mathematics can occasionally appear to me simply as sudoku for geniuses. The thing that gets me excited about mathematics is the way of thought. The way a simple proof can take a very difficult question, twist it and make it easy. The way you can take an idea and reduce it to its simplest possible form. Trying to find the smallest amount of structure one needs without the idea falling apart.

This process often takes you into incredibly abstract theoretical worlds. Yet by thinking in these terms we can often find ideas that were drowned out in complexity of the “real” world. One of my favourite examples of this is the fractal patterns found in African villages by Ron Eglash:

Once pointed out the ideas are not hard to see, and have been used to help understand the cultures the buildings come from, yet without the right idea of what to look for the structure is not obvious.

This example comes as much from anthropology as mathematics and it can often be easiest to describe what I feel is mathematical thought away from mathematics. My second example, therefore, comes from engineering. Consider a disaster like Haiti, infrastructure and housing have been destroyed. There is a need to quickly create shelter for a large number of people. The standard answer is the relief tent. This is a very short term solution however. It solves the problem, but a tent may not have a long life. Say a year or two. By this time the attention of the world has drifted. A better idea is to find cheap, easy to assemble shelters, often called transitional housing.

Vinay Gupta took a different route, and I am going to accuse him of mathematical thought. He cut away all the needs a house had and thought just about the simplest way to make a structure. He was actually thinking about how to make an easy geodesic dome. The result was the hexayurt, a building made of 12 sheets of (internationally ubiquitous) 4’x8′ plywood: 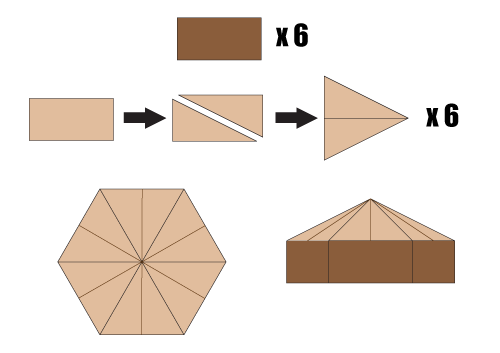 This is a building that can be made on site without specialist parts (a hammer, saw, some off cuts of wood and the 12 sheets are all that is required). A building that is cheaper than the standard relief tent (just $100). It does not even need much skill, though a fair amount of man power is needed, this is the one thing that such disasters usually have in abundance. Furthermore it is easy to adapt the building. A room can be divided off with 3 additional sheets, a taller building can be made by using two sheets to make square walls, as hexagons the buildings can be easily clustered. In fact, taking advantage of this I could not help but combine the two examples, to make a fractal village of hexayurts: 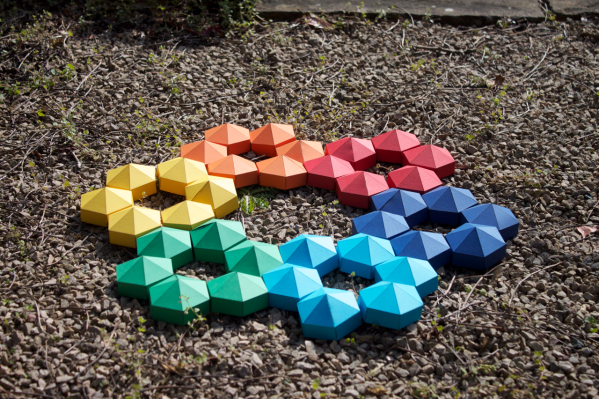 In all this however we have to be careful, malign forces are watching our every move and we never know when they might pounce: 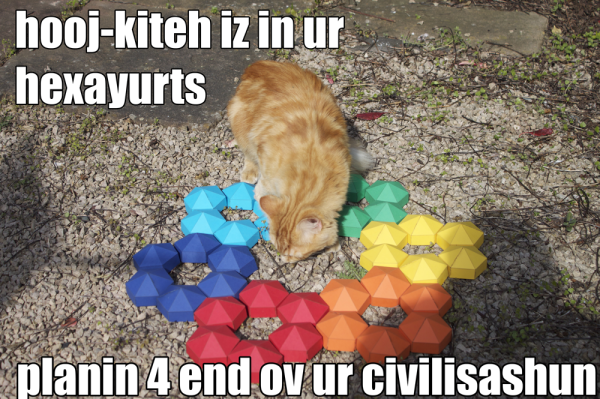 ← Lasering my Laptop
Carnival of Mathematics #65 →

One thought on “Hexayurts and African Villages”