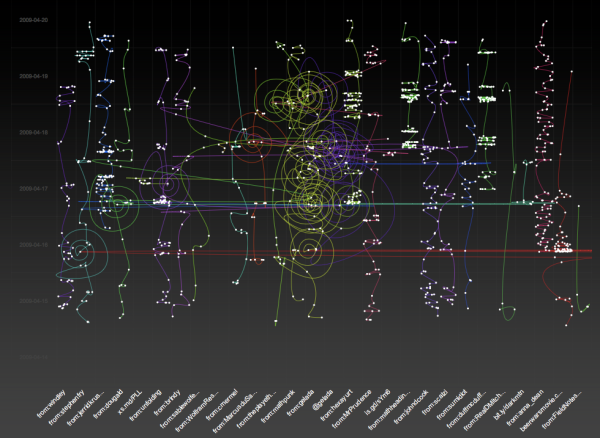 It took me a lot less time to get into twitter (@gelada) than to get a blog. However in general it is said that cycles of social media are getting faster. I realised that part of my problem, and a general problem when I look at communities online, is a fear of breaking social conventions I am not aware of. This probably comes from my English heritage.

It is not enough to be aware of this. In fact rationally I am perfectly aware that there are almost certainly no clearly established twitter conventions. A good example is how many tweets are acceptable in a day. Everyone has a certain level and I occasionally get irritated by some of the people I am following who over-post. In particular, I feel that it is at least bad style to post more than one tweet together to say something. The brevity is the key to the medium. Of course I have already broken this, which is why I say it is bad style rather than bad manners. A rule of style can be justifiably broken, however that should be thought about. It is up to my followers to decide whether the style decision I made was good or bad for them. If I make too many bad decisions they can move. That in the end is the essence, twitter currently works wonders in finding small niches. Finding the people who interest you deeply, rather than sticking with the mainstream media which have to interest a lot of people a little.

This actually leads to a fear to me. Will the growing ease of connecting to people make the process too efficient? This, combined with the firehose nature of twitter, is something I will have to negotiate with my dwindling supply of willpower. I need to make sure that I do continue to get things done, rather than get overwhelmed by potential ideas and contacts.

So the fact that I could (almost too easily) connect with interesting people on twitter (and the fact that they were there) has dragged me in. What am I going to do with it? I am not yet sure what style of tweeting I will adopt, or more deeply as Paul Prudence points out, what personality will emerge.  I am trying to stay away from too many funny comments as I feel that a) there is already plenty of this, and b) friendly feedback from my nearest and dearest has pointed out that I my funny comments are not generally considered so.  I do not promise to have no such comments, however! I started by thinking about the literary possibilities, in particular a haiku-like form, 5 sentences with 30, 29, 28, 27 and 26 characters.  I am not sure, however, that twitter is the best place for literary effort.  Though in another aspect of personal style I prefer to use full sentences and punctuation, as I attempt to in text messages.  So the best way to find out what I am doing is to look back at what I have said. There will probably be a lot on mathematics and art, with the smattering of comments on how to improve the world, and the occasional monkey joke.

So, thanks for reading and please let me know if I offend or break your personal style rules. I might not change anything but I would be interested to know.

Finally on language, when I started to write these pages I complained about the language. I simply do not like the words blogging and blogs.  To show that I am not always a language fuddy-duddy, I will say that twitter and tweet I accept wholeheartedly.

PS, why does twitter need to be centralised? Will this version be scalable? Personally for several reasons I would prefer a radically localised version, this should be about connections between individuals and small groups, not how we all plug into the same big machine.