with no common factors, and take the sum of their squares 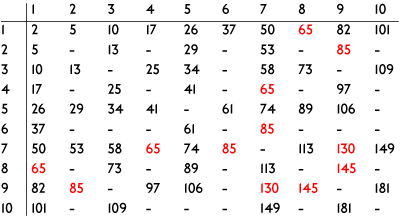 . Expanding our search however we can also find that

. All numbers in this table that do not have the forms described therefore also occur more than once in the table. In fact every number that can be represented in exactly one way as the sum of two squares is a prime, twice a prime, a prime power, or twice a prime power . This makes

an idoneal number, suitable number or ideoneal number. More generally this is a number

such that any number that has a unique representation as

are coprime) is the now familiar list: a prime, a prime power, or twice a prime power.  These numbers were studied by Euler who said:

An outstanding paradox stands upon this, for although the idoneal numbers are shaped and proceed according to a certain law, the multitude of which however are not infinite yet are extended even onto 65 terms, concern- ing this paradox I have recorded so far no more of this type in the succession which has been observed; yet neither on the other hand has it been permit- ted by me to make firm a finite number of terms, except that after the 65th term, which is 1848, none thereafter have been bestowed, even though I have continued the examination up to 10000 and beyond.

So it brings me great pleasure to announce the 65th maths carnival.

From Euler there is only one place to go, the debate over who are the greatest mathematicians. There were a couple of posts on this topic. Euler made it into a post by Alex Bellos justifying his selections for a previous top ten article in the Times. Tanya Khovanova, however did leave Euler out, but this was understandable, she was looking at living mathematicians. To keep debate rumbling, I will add my top five favourite mathematicians. The ones whose work has most inspired me personally. In historical order they are, Archimedes, Gottfried Leibniz, Felix Klein, John Conway and Tim Gowers.

Having started with a little pure mathematics, the rest of this carnival focuses on the links between mathematics and other things.

One of my favourite links is of course mathematics and art and that is well represented. The wonderful Math Monday post on the Make blog, showed how to whittle knots and links, and several others played with images from parts of circles, spirographs and a circle puzzle. If you prefer to sit back and just watch GrrlScientist on Living the Scientific Life shows a beatiful maths and nature movie, that has gone viral, though it does have a little too much of the over-hyped golden ratio.

One of the darks arts of programming is the creation of Quines, programs that can output their own source code (without cheating). Metaspring develop this idea to show how it can be extended to form the heart of the deep results of Kurt Gödel.  Computers are also of use for more practical things, but to do this we often need to make approximations, for example of the normal distribution.  Code can also provide elegant ways to construct mathematical objects, such as a collection of algorithms to make a matrix with a single 1.

Before computers a whole world of charts to do calculation were developed. Dead Reckonings shows the example of Lallemand’s Hexagonal charts helping ships to determine precise directions from a magnetic compass. Modern mathematics can also help us think about how to navigate our world. Dave Richeson in Division by zero, uses the similarity between topological and topographic to explore this.

You would not expect…

The favourite line of the maths evangelist is that “maths is everywhere”, I am not sure if I go that far, but it certainly turns up in some unusual places. Just a mon looks at the mathematics of the premier league. Even a chiropractor can find uses for mathematics, though lets hope it is use, not abuse, like the BCA’s famous take on the British legal system.

All links between mathematics and other things require people who can understand and apply the mathematical ideas. The great Terrance Tao gives some ideas on games that help you develop this mathematical thinking. From Let’s Play Math, you can even have a bit of fun with calculus.

To finish on a topical note, I was writing this carnival as I watched the British election. With the hung parilament and the discussions now going on the electoral system itself is coming under question. What does a mathematician think of this? Tim Gowers has some interesting comments.

← Hexayurts and African Villages
Would an Alternative Vote make a difference? →

13 thoughts on “Carnival of Mathematics #65”