Can you get children and young people to build mathematical scultptures in their own time?

Last week I did. We created this strange object in the lava of a volcanic island on the boundary between America and Europe.

The design, Sculpture System No. 5, by Richard Grimes,  and far more details of construction are available here.  The goal is to open this idea to the crowd and see where it is taken, crowdsourcing art.  There is already one other write up. Without further ado, here is my take on events.

If you have never heard of Fab Labs take a look, they are amazing. I came across one by chance on the small island of Heimaey in the North Atlantic.  Luckily for me the guy in charge, Smári McCarthy had a liking for mathematics and asked if I could teach something to the people using the facilities.  When you get an opportunity like that to try to corrupt kids into mathematics you cannot turn it down.  Well I cannot.

The question was what to do? Tilings are nice and produce great images, but they are a little flat. Building something in three dimensions is far more exciting.  The idea that came to me was to make a giant version of Polydron.  If you have not come across this wonderful product look into it now, especially if you are a teacher. It works best if it just left around so people can start to play on their own terms.  Even primary school children can pick it up, play and discover, yet it also holds the interest of many research geometers.

The essence of polydron is regular shapes hinging together. With these you can build anything. I started sketching some ideas in my head, but I am not a natural at building objects.  Luckily one of my inspirations for the polydron idea was on hand. My friend Richard Grimes had been working independantly on similar systems and deltahedra for many years, creating everal sculptural systems, individual objects that can be put together in many different forms. He is also a great craftsman, so he was able to create a design that was simple, elegant and beautiful, not to mention easy to put together. He named it “Sculpture system No. 5”. 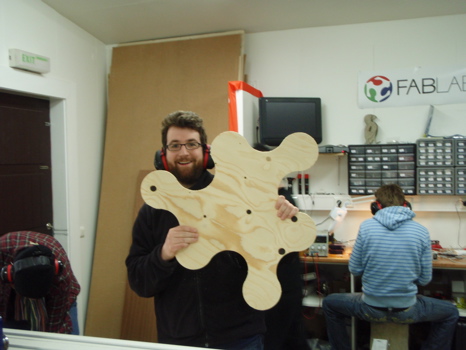 The question was what could we build that was artistically satisfying to me, taught some maths and involved people in the design rather than just as donkey work for the construction. As I am writing this in hindsight, of course these are also goals that were achieved!

For constraints we obviously want to minimise the number of shapes used. The simplest shapes are triangles, the polyhedra built from them deltahedra. I decided that twenty was a good number, it is the number you need for a regular icosahedron. The next step was to get people involved. Polydron is the natural tool for this, and as soon as I brought it to the lab it was sucked up, without even being pointed out to people. However to give some freedom to the construction the common maths art fare of highly symmetric figures would not work.  There are not enough of them. In addition, because of the symmetry, they offer the same view from many directions, which is a little boring.  So I went to the other extreme. Build figure with no symmetry. With 20 tiles this is not easy, and spotting symmetries is a great exercise.  So several groups of children took up the project and we had four different designs.  All of which I would have been happy to build.  Before construction everyone voted on the final design.

We then fired up the machines and started cutting the tiles, I will let pictures tell the rest of the story: 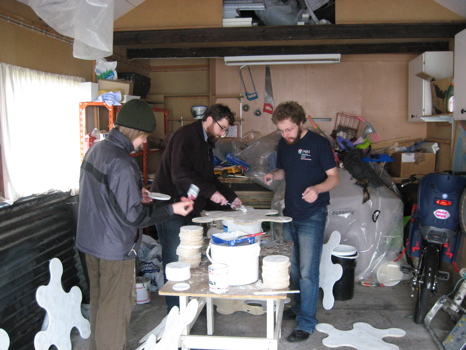 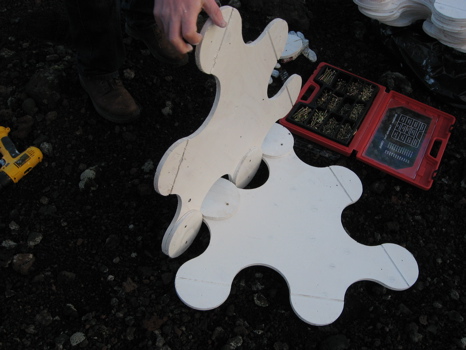 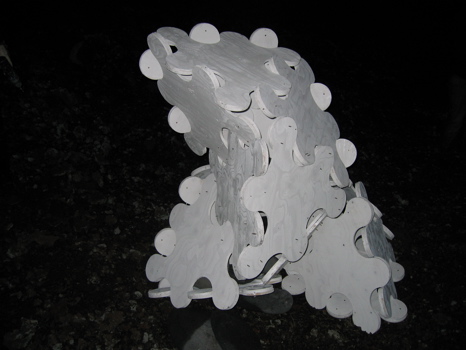 A ghost in the dark